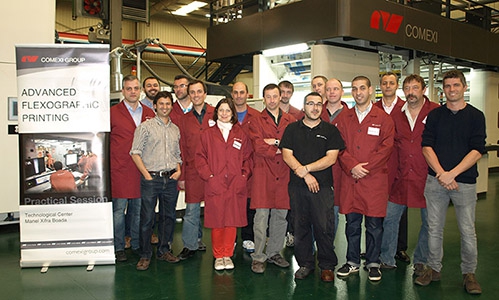 • The Manel Xifra Boada Technological Centre – the company’s training venue-  hosted the training sessions
• The course, which was given in French and received an enthusiastic reception from all participants, could be extended for the 2014 edition

Girona (Spain), 3th June 2013. - In April, the Manel Xifra Boada Technological Centre, part of the Comexi Group, hosted the eleventh edition of the ADVANCED FLEXOGRAPHICS SESSIONS. The Comexi Group facilities in Girona and the Girona Science Park were the venues for these training sessions, held between 15th and 18th April.

This latest edition of the course was given entirely in French, and was attended by 13 participants, representing companies from France -  including  Palamy, Placel Chupin, Constantia-Jeanne D’Arc, STTP Emballage and Siegwerk France - and Algeria, represented by Info Imprimerie. As in previous editions, the course included theoretical and practical sessions covering key issues in the companies’ day to day operations, related to flexographic printing on flexible materials, including inks, colour management, production strategies, pre-printing, standardisation, optimisation and inking systems, etc. Based on the results from the questionnaires handed out at the end of the course, the participants rated the course extremely highly, and for 2014 there are plans to increase the number of training courses in French from one to two per year.