Comexi, awarded in the EMAS Awards for its commitment to sustainability 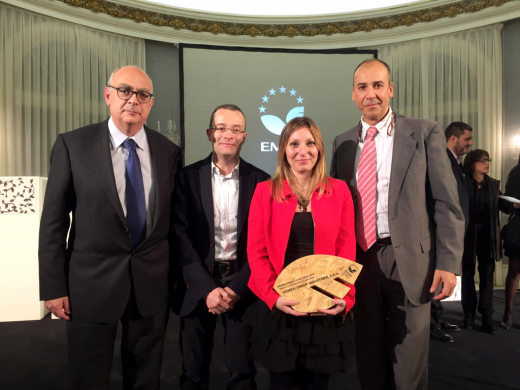 Comexi, specialist in solutions for the flexible packaging industry, was awarded last Wednesday night at the EMAS Catalunya Awards. This recognition endorses the group’s commitment to sustainability.

The EMAS Catalunya Awards, given biannually by the EMAS Club and the Generalitat de Catalunya (Catalan Government), are intended as an incentive to improve the environmental management system. The awards recognize the best practices that have been carried out by entities that hold the European EMAS accreditation in environmental excellence.

Participating in the EMAS Awards is a perfect opportunity to improve the Environmental Management System, to innovate in the current management and in internal and external communication modalities as well as the involvement of stakeholders. In addition, it acknowledges actions developed within the framework of environmental management systems.

In Comexi’s case, the group has received the Award for Best Environmental Conduct for the promotion of its revolutionary Offset technology, which reduces environmental impacts such as atmospheric emissions and waste generation, as well as increasing energy efficiency. In this sense, the award reinforces the group’s commitment to improve sustainability in the printing process without renouncing to the highest quality.

This is the second time that Comexi’s offset technology has been awarded an EMAS prize. In May 2015, the European Commission also distinguished Comexi with the European EMAS award in Eco-innovation for “Sustainable Innovations for Environmental Enhancement.”

Recognition for other achievements

In the occasion, the EMAS award also acknowledges other accomplishments that Comexi has promoted for environmental improvement, such as the plant façade installation at its headquarters in Riudellots de la Selva (Girona), which represents a reduction in energy consumption as well as an aid to biodiversity. This prize also distinguishes the group’s approach to promote the usage of electric vehicles, with the conditioning of two charging points also in its headquarters; as well as other achievements such as the usage of a recycled glass amongst its workers, thus reducing the consumption of plastics cups and improving sustainability. Additionally, Comexi’s workers collaborated with nature photographs that are part of the EMAS Environmental Declaration.

It’s common knowledge that offset printing is dominating the printing...

Comexi, at the annual meeting...

Comexi Group collaborates with BASF and...

The aims of innovation and the development of more sustainable printing unite...