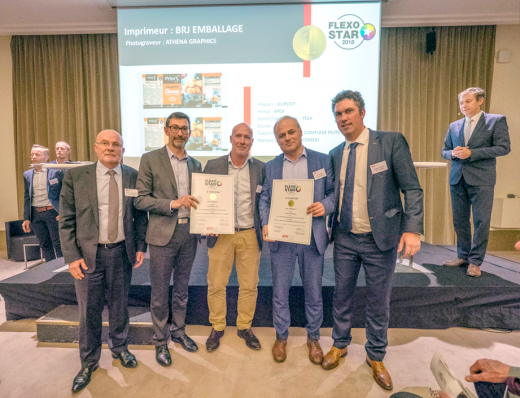 Comexi, a specialist in solutions for the printing industry and the conversion of flexible packaging, has come out stronger at the 32nd FlexoStars awards ceremony, held in Paris, thanks to the five awards received by four of its French customers: Palamy, BRJ, RKW Castelletta and Constantia Jeanne d’Arc. Organized by ATF Flexo (Association Technique Française de la Flexographie), the FlexoStars gives awards in flexography on various materials for the best printed job in France.

The companies presented the best packaging to be evaluated by both a technical jury and an artistic jury, which took into consideration different criteria such as tracking and colour rendering, lineation, pressure, point definition, recoveries, impact of images and ad hook, among others. The awards were presented in the Pavillon Dauphine in Paris, where 15 gold prizes, 10 silver prizes, 8 bronze prizes, a prize of the jury and a prize of innovation awards were given.

"The Palamy - BRJ Group participates every year in FlexoStars competition and we are happy to have been awarded again, and this year with 3 awards. This professional recognition highlights the value and skills of our teams through the projects and the confidence our customers give us", explains Patrick Proux, the company’s owner. Palamy, with over 50 years of experience, is a plastic film manufacturer and supplier, which offers basic plastic films, printed films and cases for automated packaging, and covers all the chain process: processors, distributors and industrial.

Additionally, RKW Castelleta obtained a silver prize in Retractable Polyethylene Films (Films Polyéthylène Retractable) for ‘Evian 12x33cl Kids Mickey Us’. Virginie Aulagne, sales manager from RKW Castelletta, stresses that “as every year, we are proud to participate in the ATF Congress and the FlexoStars awards. This special moment allows us to meet and interact with flexographic professionals. Once again, we had the pleasure of receiving a prize. This recognition values ​​the work of the RKW teams and allows us to communicate with our customers”. Specialized in multipack shrink films, they have offered a wide range of innovative packaging solutions since 1961.

The third company awarded was Constantia Jeanne d’Arc, with a silver prize in Printing on Aluminum Supports - Cliché or Sleeves (Impression sur Supports Aluminium - Cliché ou Manchons) for ‘Beurre d’Isigny 250g ½ sel’. Constantia Flexibles is one of the world's leading manufacturers of flexible packaging. The group supplies products to numerous multinational corporations and local market leaders in the food, pet food and pharmaceuticals industries. The plant CJA, located in Vecqueville, is a part of the Food Europe Division and focuses on packaging for dairy products.

Comexi participates at the FlexoStar...

Comexi took part this December at the FlexoStar Awards Gala that was celebrated...

After a few years of close collaboration between COMEXI GROUP and ACOM, and due...

• 75 professionals witnessed for the first time the new finishing solution...

Comexi Group has implemented a 24/7 service for its Comexi NEXUS (laminating and...

The Manel Xifra Boada Technological Centre, of Comexi Group, has taken one step...

The course participants, from nine different countries, have chosen the centre...

Comexi Group will install during the second half of 2014, a Comexi PROSLIT...

Successful presentation of the Manel...

The Manel Xifra Boada Technological Centre performed one of the conferences held...

Attendees valued the course content and the quality of the practical sessionsThe...

The center has expanded for 2014 its theoretical and practical training in...