Divulgation and technological knowledge, protagonists of the XII edition of Manel Xifra i Boada Awards 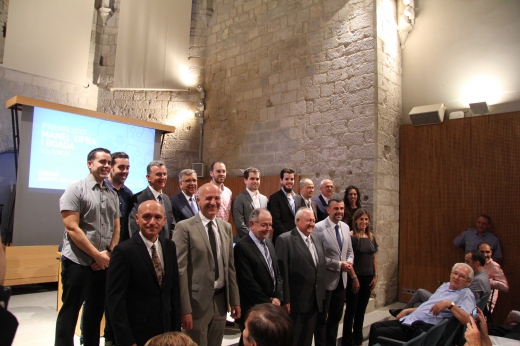 Comexi and the College of Graduate Engineers and Industrial Technical Engineers of Girona have recognized the work of the Quèquicom program, the Vicorob centre and the career of Josep Sallent

The Sala de Graus of the Facultat de Lletres of the UdG has hosted the ceremony for the 12th edition of the Manel Xifra i Boada Awards, organized annually by Comexi and the College of Graduate Engineers and Industrial Technical Engineers of Girona.

The program Quèquicom of Canal33, the Vicorob Institute of the UdG, the doctor in engineering Josep Sallent and four young engineers have received this awards given by the conseller d’Empresa i Coneixement, Santi Vila.

The organizers have recognized the program Quèquicom of Canal33 with the Manel Xifra i Boada Award for its transmission of technical and technological knowledge. Quèquicom is a television programme that since 2006 promotes scientific and technical content weekly in a fun and educational way. Jaume Vilalta is its director and presenter and Pere Renom and Georgina Pujol are its reporters. This program has received numerous awards and recognitions, including the National Award for Scientific Communication in 2015.

As for the Manel Xifra i Boada Award for the best career, this year was been recognized Josep Sallent. Sallent studied professional training in electricity and later studied Electrical Industrial Expertise studies at the Universitat Laboral de Tarragona. In 1967 he started working in a small family business dedicated to the textile sector. Thanks to this first job, he was involved in advisory tasks in the organization and management of the production of industrial companies until 1975. After this experience he was accepted at the Industrial Technical Engineers of the Ministry of Industry of Madrid, which allowed him to exercise as inspector of Industry in Girona. From that moment he began a trajectory for different industrial positions that culminates in 2012 being named as Cap de Servei d'Empresa in Girona. Sallent continued his formation in the university, where he obtained the title of Electrical Industrial Engineer, a degree in Economics and Business Administration in 1988, and a doctorate in Business Administration and Management in 2000. For 35 years he has also combined his professional activity with its passion, teaching as a professor in the UPC and the UdG. In addition, in 1988 he began as director and professor of the MBA in Business Management of the UdG, which has been responsible for 23 promotions. Sallent, has been linked to the Cambra de Comerç de Girona, and for twelve years he has also been a member of the Board of Directors, Treasurer and President of the Formation Commission of the College. He is currently working with companies such as Cáritas Girona and the Càtedra de Responsabilitat Social of the UdG.

The Manel Xifra i Boada award to the applied research group or technology centre, this year has been awarded to the Vicorob Institute of the UdG. Created in 2014, it is a reference catalan in the fields of Medical Image Analysis, Multimedia Image Analysis, 3D Perception in Industrial Environments, Underwater Vision, Underwater Robotics and Artificial Intelligence.

As for the recognition that is made every year to the young engineers who have been awarded by the Board of the Superior Polytechnic School of the UdG for the best final project; this year the awarded have been: Albert Cucharero Mayol for his project: "Disseny d'un parc eòlic amb un sistema de producció d'hidrogen a través de l'electròlisi de l'aigua”, Èric Pairet Artau for his project "Integració de timons en el robot SPARUS II per al control amb cinc graus de llibertat", Albert Lara Martí for: "Filtre premsa per a mineria" and David Brugat Plata for: "Formulació i caracterització de suports nanocel·lulòsics amb propietats magnètiques".

Objectives and trajectory of the Prizes Manel Xifra i Boada

The awards, organized by the College of Industrial Technical Engineers of Girona and Comexi, receive the support of the Universitat de Girona (UdG) and are sponsored by Banc de Sabadell and Caixa d’Enginyers.

The awards were born in 2005, shortly after the death of the engineer, who gives them the name and who, at the same time, was the founder of Comexi: Manel Xifra i Boada. Manel Xifra contributed in the creation of the prizes and for this reason, and before celebrating the first edition of the prizes, he was awarded the first posthumous award since the prizes reflect the philosophy that Xifra i Boada represented.

Manel Xifra i Boada (1928-2005), was a technical engineer who studied in the School of Industrial Engineers in Terrassa and dedicated his professional trajectory to the industrial sector. In 1954 he founded Comexi, a multinational company currently devoted to the manufacture of solutions and equipment for the flexible packaging sector. Manel Xifra i Boada was a member of the Consell rector del Patronat Català pro Europa a Girona, of the Patronat de l'Escola Politècnica Superior of UdG and of Ple de la Cambra de Comerç de Girona, and also of the Col·legi d'Enginyers Tècnics Industrials de Catalunya (CETIG).

People that as been recognized in the previous editions of Manel Xifra i Boada Awards:

During these past years, Manel Xifra i Boada Awards have been consolidated as one of the main events that project key values ​​such as the transmission of knowledge and the work of engineering in Catalan society.

Comexi, global leader in solutions for the flexible packaging converting...

A Comexi e a Reifenhäuser reforçam a...

A Comexi e a Reifenhäuser, especialistas em soluções para a...

Nick Coombes explains how even today’s sophisticated technology can be...

Always investing in your benefit

Welcome to the third edition of Comexi News newsletter. We appreciate and value...

How flexible packaging can be green?

Packaging field is confronted with many challenges. Nowadays, one of the most...

The group strengthens its team to offer a more direct and close service to its...