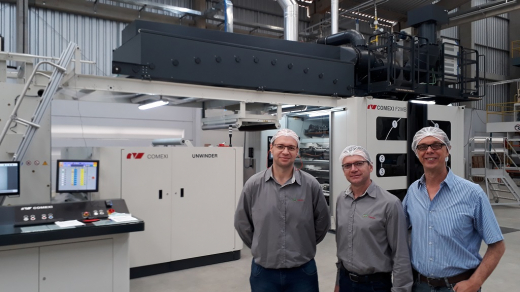 The Brazilian company has opted for the flexographic press with Comexi gearless system in order to work with more safety, quality and productivity

Comexi, a specialist in solutions for the printing industry and the conversion of flexible packaging, has consolidated its presence in Brazil after the sale of an F2 MB press to Pamplastic Indústria de Embalagens Plásticas LTDA. The Brazilian company, which produces exclusive packaging based on the needs of each of its customers, became the fourth in the Santa Catarina (SC) region which relies on Comexi gearless technology.

“We decided to invest in the Comexi F2 MB as it is a more complete flexographic press in comparison to others which we find in the market, allowing us to work with more safety, quality and productivity,” says Jocelio Pamplona, ​​owner of Pamplastic. He adds that the Comexi F2 MB allows them to successfully complete all types of jobs, "from the simplest, with 100% machine productivity, to the most complex, where speed is not a priority, high quality is still ensure."

Pamplastic is a flexible packaging industry that is based in the city of Gaspar (SC). The company was founded on March 1, 1999, with the objective of manufacturing recyclable plastic bags. Over time, it has expanded its product lines, currently operating in the monolayer packaging market (technical films, bakery packaging, line refrigeration and packaging for the textile sector, etc.) and laminates (technical films, stand up pouch, side bags, four welds and side welding laminates, etc.). "Today our company is able to serve the entire market, focusing on quality as one of our pillars," stresses Pamplona.

The sale of the F2 MB is the first operation between the two companies. The owner of the Brazilian company believes that having the support of a company such as Comexi “is of fundamental importance to us. We are moving in a new direction, thus having information regarding the obstacles we might find, makes everything easier,” comments Jocelio Pamplona, ​​owner of Pamplastic.

“Pamplastic, a company with origins in gear technology, is growing rapidly in southern Brazil. It has built a new factory, outfitted with other machines, and has opted for a Comexi F2 MB flexographic press,” says André Pérez, Comexi sales manager in Brazil, who recognizes that for the company this partnership with Pamplastic is “very important. We are closely following and supporting the transition they are making from gear machines to presses with gearless technology.”

The Comexi F2 MB press is an advanced machine designed to satisfy the print needs of medium runs in the flexible packaging sector of the retail and wholesale channel. This flexographic press shares the patented FLEXOEfficiency concepts of ergonomics and accessibility, as well as the level of performance and robustness with the rest of the Comexi F2 range. This is all integrated with a simplified drying system design. Without a doubt, the Comexi F2 MB is a highly productive and performing machine.

The appointment of Hervás, independent member of the board of the company...