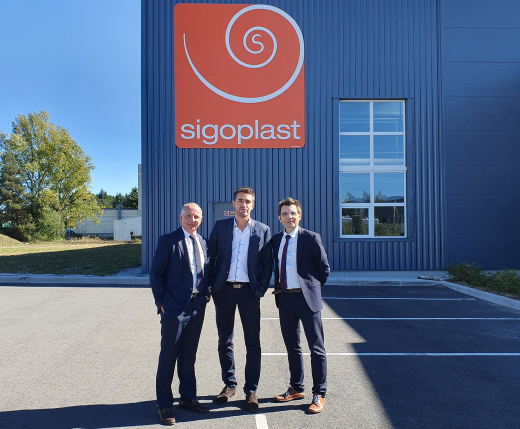 The company has re-established itself after the fire in 2017

Sigoplast, a French company specializing in the design of plastic packaging, has strongly recovered itself after a fire which completely destroyed its facilities in Saint Pal de Mons. After two years, Sigoplast has inaugurated the new factory celebrating an event that was attended by the highest authorities of the area, as well as Comexi representatives, customers and other partners. Comexi team moved to Saint Pal de Mons during this important event.

The new plant covers an area of ​​5,000 m2, which is 1,000 m2 larger than the previous facility, investing the entire machinery portfolio with the Comexi state-of-the-art technology. The facility already began operating in October 2018 with the arrival of the first employees. Since the beginning of this year, its production has progressively increased.

“From Comexi we congratulate Sigoplast on the new facilities, and we hope that they will return to normal in terms of production as soon as possible,” explains Olivier Gibert, the Area Manager in France. The company has acquired two flexo presses: a new Comexi F2 MC and a Comexi F2 MB. Sigoplast has also invested integrating slitter Comexi S2 DT with 4 Laser for micro and macro perforations.

In the flexible packaging sector of the retail and wholesale channels, the Comexi F2 MC is designed to satisfy the printing needs of both medium and long runs while the Comexi F2 MB satisfies the need of medium runs. The Comexi S2 DT, the group's best-seller slitter, slits most of the webs used in the flexible packaging market, at a very high production rate due to its double turret output. The integration of a laser-in-line processing system allows for the performance of micro and macro perforations, among others finishing processes.

The group has recently installed a Comexi F4 at the company's facilities in...

Comexi consolidates its position in the...

A hundred professionals from 32 leading companies in the sector participated in...

Comexi sponsors the first team of the...

Comexi has become the main sponsor of the first team of the Basket Club...