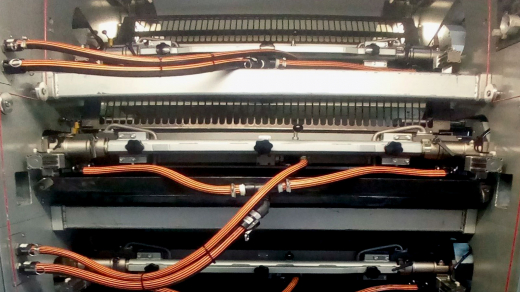 The Belgian company, with the use of a Comexi FW 1508 flexographic press, has achieved greater stability in their production process

Optimum ink consumption and greater production stability are a few of the benefits NV Orbo has achieved, due to the intervention performed on its machinery by the Comexi service department, which included the retrofit of a Comexi inking system. This service is designed to boost the capabilities of the machines installed in the factories of Comexi customers, and entails outfitting the machines with various functional and constructive improvements, including technological advancements developed in the latest generation of Comexi machines. The objective of this maintenance is to upgrade the clients’ machinery, enlarge the lifecycle of the machines, and increase their performance.

In 1995, NV Orbo was established as a label printing company. Since 2006, the company has also specialized in flexible packaging, which is nowadays the only activity. Comexi service department recently performed an upgrade on their Comexi FW 1508 flexo press: doctor blades, the low friction pistons system of the advance system, and the ink feed pumps have all been replaced by the most recent parts and/or systems implemented in Comexi machines. “Due to Comexi's retrofitting service, we have reduced the wastage of ink and the necessary time to clean. Furthermore, less bumping occurs, and the production process has more stability, "explains Johan Naessens, the General Manager of NV Orbo, while Francis Steen, the Factory and Production Manager, comments that "presently, there is far less waste, set-up times are shorter, and machines are more reliable.” Steen concludes with stating that "retrofitting has been a very good investment with relatively short downtime."

The headquarters of NV Orbo are situaded in Kortemark, the western part of Belgium, which is a strategic location to serve frozen vegetables producers. NV Orbo has 30 employees and converts approximately 20 million square meters of film: 75% in flexographic printing and 25% in offset printing. The Belgian company provides printed flexible packaging on both mono-film and laminated reels. In addition to the Comexi FW flexographic press, NV Orbo also has a Comexi laminator and two Comexi slitters, one of which is equipped with a laser system.