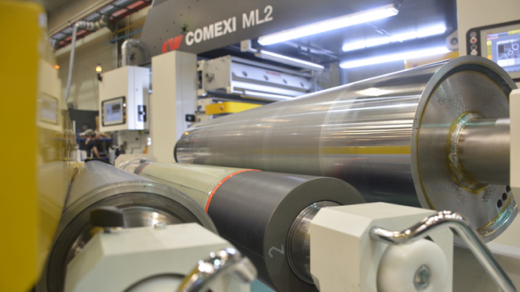 Many manufacturers claim to have a Flexographic coating unit but, is this statement true?

Today we will be dissecting the differences between the Flexographic and the Semiflexo Coating Unit and why -even their names are very similar- they have completely different purposes.

So, let’s start from the beginning, what is a Flexographic coating unit?

Well as the name says, it is an independent coating unit in the form of trolley which can be integrated into a Coater or Laminator and serve a similar purpose of a Flexographic printing deck which can be found in any Flexo printing press.

The main use it has is to apply any type of lacquer, varnish or color in register or without register with great precision and quality. The main advantage of this system is that it allows a very quick changeover between different formats and jobs since it works with a sleeved system.

In the era of time to market, being able to changeover between different SKU’s in a matter of two minutes is definitely worth considering. One of the biggest concerns of Converters and printers is the shortening of runs and the number of SKU’s sky-rocketing.

Then, why do we find systems in the market which are called Flexo coating units but they are not prepared to work in register, which is the main advantage of this system? Well, that in fact is because there are people that call Flexo coating unit to something which in reality is a Semiflexo.

The concept of Semiflexo is something which might sound redundant to explain, as the name seems to imply that it has half of the possibilities a Flexo trolley has, which in fact is partially true since out of the registered and non-registered jobs you are left with the latter one’s only.

The Semiflexo trolley -despite the similarities in the naming- is a trolley which is used for a completely different range of applications. The system, which can have two or three rollers depending on the manufacturer, is used for transferring into different substrates very high grammage and/or high viscosity adhesives or coatings.

This system has many benefits for those who are willing to apply coatings such as Heat-Seal or High viscosity adhesives. One of them is the possibility of working with a higher percentage of solids, allowing a much lower use of solvents, allowing clear benefits also in drying.

Another clear benefit is being able to transfer absolutely smooth layers of coating, since the transfer roller is not engraved and hence, it does not leave any mark on the final substrate unlike Gravure, which is also used for some high grammage applications.

All in all, each coating system has its pro’s and its con’s and its applications but let’s call the things by its name and not mistake a Flexo with a Semiflexo unit!

The Belgian company, with the use of a Comexi FW 1508 flexographic press, has...

Services were performed on the flexographic presses, which were acquired by the...

The Caribbean company, with the continual support of Comexi, has acquired an F2...

The company located in the Ivory Coast purchased a Comexi S2 DS, its eighth...

The company fully enters the digital era by offering streaming demos and...

Successful Remote Installation of a...

Comexi has been working for an extended period of time towards automation...

To date, the Technological Center of Comexi has held 30 live streaming webinars...

The new US headquarters will offer on-site training in flexo, lamination,...